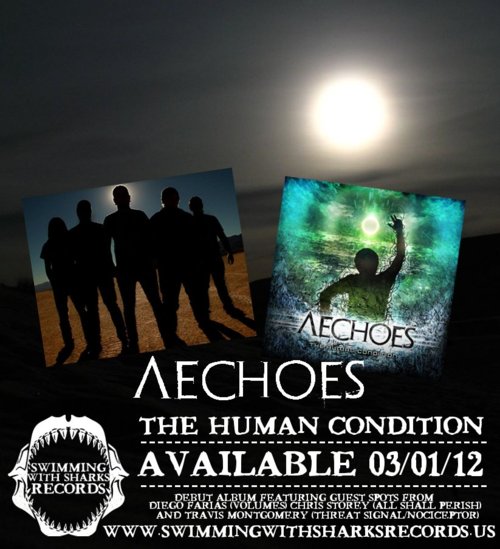 Las Vegas progressive-hardcore/djent outfit Aechoes have announced that their latest effort ‘The Human Condition’ will be released via Swimming With Sharks Records this upcoming spring.

The band’s debut album boasts an all-star cast of album credits including Mediaskare Recording artist Daniel Braunstein, guitarist for the band Volumes, heading up vocal tracking, mixing, and mastering at DB Studios. All instrument tracking was done by Diego Farias, also a guitar player from Volumes, who provided a piano composition on the album as well. Other notable contributions include a guitar solo from Chris Storey (ex-All Shall Perish) and guitar work from Travis Montgomery (Threat Signal). The album is a complex and creative blend of the best elements of progressive deathcore, hardcore, metalcore, and djent.

Aechoes vocalist Kiernan McArdle states, ”We are very pleased to announce our new partnership with Swimming With Sharks Records. Noah Robertson works harder than most label owners, and understands the trials and tribulations that bands go through. He shares the same exhausting work ethic that we see daily with the record label and his band The Browning. We have complete confidence that Aechoes, and SWS will grow together and do great things. We are excited that our long awaited debut album, The Human Condition, is being released by such an awesome artist friendly label. We look forward to hitting the road this Spring and Summer in support of the album.”

In addition to signing to Swimming With Sharks Records, Aechoes have also recently inked a publishing deal with band management and publishing company, Salem Rose Music (Abigail Williams, Pathology, Bonded By Blood). Kiernan from Aechoes responds, “We are very excited to be signing with Salem Rose. We’ve wanted to work with Marco for a long time now. We’ve seen his success with Metal Blade and Century Media, and are glad to have his support,” explains vocalist Kiernan McArdle. “We’ve worked hard, and we have accomplished a lot within our first year of being Aechoes. We have a lot in store for the future, and this milestone is just the beginning.”

‘The Human Condition’ will be available worldwide in late February/early March of 2012. Tour dates will be announced soon.

This entry was posted on December 5, 2012 by Noah "Shark" Robertson. It was filed under Aechoes, News .